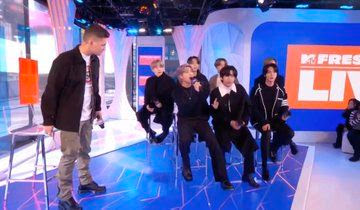 RM said in the MTV Fresh Out interview, that it was supposed to be two parts, Shadow and Ego, but they put them together, because it took so long. It took so long, because they put quality first.

And this is why they are so successful. Period.

Anyone who has not WATCH


: Okay, ARMY, we've been together for 7 years, we want you to know you're special ... As I said before, you know for sure that you'll like BTS was the best decision ever.

So, the name of the song was not 'ON' at first, but we got together and had a meeting trying to decide what we wanted the main song to be and what we wanted to call it. And later,

We will continue working to provide good music, let's work together so we can make good music for ARMY.

Talking about the tour) I think we will share the same things we have shared with ARMY and work hard to prepare a great show for ARMY. (+)

And I really want to say that we have some amazing things saved for you on this Tour.