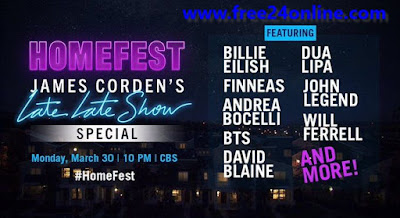 SHARE
BTS will give performance from South Korea for the James Corden's 'Homefest Special' show on CBS, March 30!

[NEWS]
BTS will have a guest performance on a special on the Late Late Show with James Corden this Monday (March 30) at 10pm EST
.

They will perform from the safety of their homes
.

Monday. Join us for #Homefest
@billieeilish
and
@finneas
sing in their living room.
@BTS_twt
perform from home in South Korea.
@johnlegend
at home in LA.
@DUALIPA
with a new intimate performance.
@AndreaBocelli
from Tuscany. David Blaine, Will Ferrell and so much more
@CBS
10pm This coming Monday, we're bringing people together to keep them apart.
.

James Corden is hosting a 'Homefest' special from his garage with BTS, Billie Eilish, Dua Lipa and MORE!
BTS along with other artists including Billie Eilish, John Legend , Dua Lipa and more will take part in James Corden’s Late Late Show Special episode called "HOMEFEST" which will be released  on Monday 30th of March.
James is one of my favorite interviewers with BTS.  Carpool was the best!  The backseat comedy boys were especially funny!

- All will perform from the safety of their homes