what’s everyone doing for St. Patrick’s Day After cancellation due to corona virus ? - free24online

Home GENERAL what’s everyone doing for St. Patrick’s Day After cancellation due to corona virus ?

what’s everyone doing for St. Patrick’s Day After cancellation due to corona virus ? 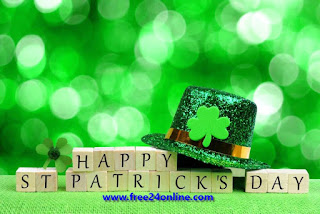 2 - It's my birthday, so watching Ghostbusters with my kids who have not yet seen it.

3- I just added 15 movies to my prime video.  I might clean my bathroom tomorrow.  Kitchen the day after.  Currently unemployed so I want to space it out.  Not too much fun all in one day.

4- Thinking about telling my family I'm just going to the bathroom and then not coming back into that same room again. The versatility of my Irish goodbye is limited these days.

5- We vote in Illinois. I'm taking my hand sanitizer.
Might even wear latex gloves. And then I'm making corned beef cabbage & veggies in the crock pot!
We voted early on Saturday in FL.  The poll workers were super conscientious wiping everything down after each voter - from pens to folders.

6- New gaming laptop to compensate for my cancelled SE Asia vacation and subsequent isolation.  And baking. I will master my cake game before this is over.

7- I was thinking of having a virtual party. My daughter was 40 today but "confined to barracks" (OK, house) awaiting #Covid19 test results. She sent me a photo of my slice of birthday cake.

8- Eating a way-too-thick homemade reuben out of a bowl and shuffling aimlessly from room to room. With (green) Packer gear on. While I work remotely. Bored. Oh, and muttering about the Fed.

9- I set up a mini-PA for #StPatricksDay as I was going to share a stripped down setup with another band to make load in/out easier. Instead it's just in my basement. I might stream a little Irish music tomorrow though on
@Periscope
.
10- I dumped out all of my closets over the weekend and there is no room to walk now.  Hopefully I will find time to put stuff back!

11- Trying to figure out if I can make “corned beef and onion”, with rice as my starch, as there were no cabbages, potatoes, celery, or carrots when my husband went to the store. Don’t worry- we have Guinness.

12- My cat has informed me that tomorrow is also the feast day of St. Gertrude of Nivelles the Patron Saint of Cats. I am, therefore, required to spend tomorrow feeding him delectable dishes and catering to his every desire.

13- I just did that. This whole thing reminded me of the Purge, which gave me the great idea to... purge. So far, several big boxes ready to donate, lots of never worn, new-with-tags clothes and shoes. My closet looks amazing. Linen closet on deck. Kitchen in the hole.

14-  after I take a shower.
Store shelves were emptied Sat night of anything resembling corned beef, cabbages,carrots so I’ll bake some chicken. Anything for the cause.

15- We are taking three boxers to the deserted beach. Then they will get baths. Then I will wash the towels and eat avocado toast. After that ? Sky is the limit

16- I saved half a loaf of Trader Joe's Irish soda bread in the freezer. And two bottles of Guinness Extra Stout. And a DVD of "The Quiet Man," so I'm good.

17- Dying the water in the bathtub green, before dropping in some toy boats. Then, marching from the fridge to the couch.


18- Homeschooling while working from home. New normal! My kid said something about hiding gold coins which is maybe something they would have done at school(?)

19- I'm seriously thinking about wearing my green wig, green tutu,  shamrock glitter tattoos on my face to work. It was my costume for the Shamrock run that was canceled. I have to go to work to perform testing for the SARS-COV-2 virus so I might as well try to make it fun.

20-I have a bottle of Jameson's and a plan for loaded mashed potatoes and a loaded me.

Crank up some Dropkick Murphys and Loreena McKennitt. Scream at the void. Lie on my kitchen floor in the dark and quote Yeats. Make a couch fort and sleep in it.

Saint Patrick’s Day, feast day (March 17) of St. Patrick, purchaser saint of eire. Born in Roman Britain in the late 4th century, he turned into abducted on the age of sixteen and taken to ireland as a slave. He escaped however again approximately 432 to convert the Irish to Christianity. by the time of his loss of life on March 17, 461, he had hooked up monasteries, churches, and schools. Many legends grew up round him—as an example, that he drove the snakes out of eire and used the shamrock to give an explanation for the Trinity. ireland came to have a good time his day with non secular offerings and feasts.

It was emigrants, specifically to the usa, who transformed St. Patrick’s Day right into a largely secular excursion of revelry and celebration of factors Irish. towns with big numbers of Irish immigrants, who frequently wielded political electricity, staged the maximum sizeable celebrations, which covered problematic parades. Boston held its first St. Patrick’s Day parade in 1737, observed with the aid of new york town in 1762. for the reason that 1962 Chicago has coloured its river green to mark the holiday. (even though blue become the coloration historically associated with St. Patrick, green is now commonly connected with the day.) Irish and non-Irish alike commonly participate in the “wearing of the inexperienced”—wearing an item of inexperienced garb or a shamrock, the Irish national plant, in the lapel. Corned pork and cabbage are related to the vacation, and even beer is once in a while dyed inexperienced to celebrate the day. even though some of these practices ultimately had been adopted via the Irish themselves, they did so largely for the advantage of vacationers.

Saint Patrick's Day, or the ceremonial dinner of Saint Patrick (Irish: Lá Fhéile Pádraig, "the Day of the festival of Patrick"), is a cultural and religious party hung on 17 March, the conventional demise date of Saint Patrick (c. advert 385–461), the foremost consumer saint of ireland.

Saint Patrick's Day became made an reputable Christian feast day in the early 17th century and is found via the Catholic Church, the Anglican Communion (mainly the Church of ireland),[4] the jap Orthodox Church, and the Lutheran Church. The day commemorates Saint Patrick and the advent of Christianity in eire,[3] and celebrates the history and subculture of the Irish in general.[5] Celebrations usually involve public parades and fairs, céilís, and the sporting of green attire or shamrocks.[6] Christians who belong to liturgical denominations also attend church services[5][7] and historically the Lenten regulations on ingesting and drinking alcohol have been lifted for the day, which has endorsed and propagated the holiday's way of life of alcohol consumption.[5][6][8][9]

Saint Patrick's Day is a public holiday inside the Republic of ireland,[10] Northern eire,[11] the Canadian province of Newfoundland and Labrador (for provincial government personnel), and the British foreign places Territory of Montserrat. it's also extensively celebrated in the uk,[12] Canada, united states, Brazil, Argentina, Australia and New Zealand, specially amongst Irish diaspora. Saint Patrick's Day is widely known in greater international locations than every other national pageant.[13] present day celebrations had been substantially motivated by means of the ones of the Irish diaspora, specifically those who developed in North the us. however, there has been complaint of Saint Patrick's Day celebrations for having become too commercialised and for fostering terrible stereotypes of the Irish people