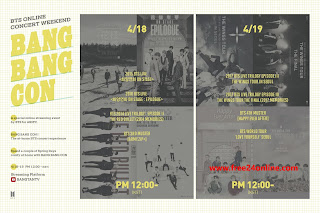 We will watch this baby BTS unit full performance from the 3rd Muster on 4/18 #BANGBANGCON!!!

“If you watch BANG BANG CON through the Media tab on Weverse on April 18 and 19, your ARMY BOMB will be linked and synced to the performance for that real concert experience!”

Are you ready for #BANGBANGCON?

Worldwide K-Pop Sensation BTS is giving you a reason to look forward to next weekend, April 18 and 19, with BTS ONLINE CONCERT WEEKEND: BANG BANG CON

#BTS Announce At-Home Concert Streaming Series, "BANG BANG CON"
This is the exclusive content of
@BTS_twt
that can be enjoyed on 'BangtanTV'.

How to watch: "The special online streaming event consisting of eight parts is available for free and will take place on April 18 and 19, each day beginning from 12 PM KST via the official YouTube channel BANGTANTV (April 17 and 18, each day starting from 11:00 PM in ET)," a release explains.

The agenda of the Bang Bang concert online on the official Btantan channel.