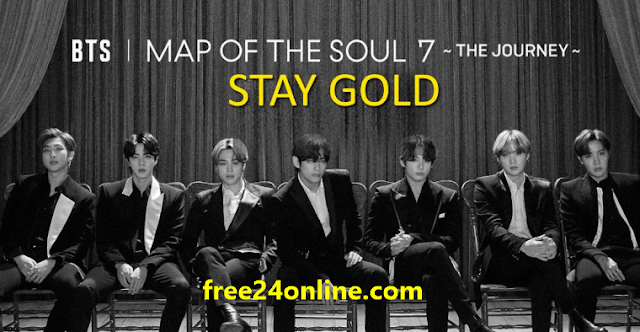 "Stay Gold" is a Japanese tune by South Korean boy organization BTS. It can be launched on July 15, 2020. It is the second one and identify music in their fourth Japanese complete-period album Map of the Soul: 7 ~The Journey~.

New BTS track is on its way! The South Korean superstars launched their noticeably awaited 'Map Of The Soul: 7' album back in February 2020, that went onto smash several facts, was No. 1 in 21 international locations, and is one of the maximum successful albums of 2020 already. The institution will drop their fourth Japanese album 'Map Of The Soul: 7 - The Journey' on July 15, 2020.

#BTSBTS to release 'Stay Gold' from their Japanese album Map Of The Soul: 7 – The Journey on June 19

Ahead of their Japanese album, the septet will launch the name music 'Stay Gold' on June 19, 2020. The assertion turned into made on their Japan website. Usually, the identify tracks are accompanied by using music movies, it is going to be interesting to peer what the institution has in keep for the enthusiasts.

'Stay Gold' will even serve as Original Sound Track for Japanese drama, Spiral Labyrinth – DNA Forensic Investigation (literal translation). Tanaka Kei will headline the drama that is primarily based on a manga of the identical name.

The album may have Japanese versions of a number of their previous album songs which include 4 new tracks - 'Intro: Calling', 'Stay Gold', 'Your Eyes Tell', and 'Outro: Journey'. Jungkook has participated inside the composition of 'Your Eyes Tell'. He these days launched his authentic tune 'Still With You' all through BTS FESTA 2020.

'Stay Gold' might be the first Japanese release since last year's 'Lights/Boy With Luv'.

Meanwhile, BTS is set to host their seventh anniversary with a virtual live performance “BANG BANG CON -The Live,” on June 14. They also are presently working on their next album.

It could be to be had for streaming and downloading global on June nineteenth, 2020 @ 6pm Japan time
🇺🇸11pm HT (6/18)
🇺🇸2am PT
🇺🇸3am MT
🇺🇸4am CT
🇺🇸5am ET
Due to COVID-19, TV Tokyo's drama, "Spiral Labyrinth ~DNA Science Investication~" and the release of BTS's tune, "Stay Gold" has been postponed indefinitely!

The new track “Stay Gold” is the first Japanese unique music because the release in their hit single “Lights” (launched in July 2019).

"Stay Gold" can be covered of their fourth Japanese album to be launched this summer season.