Strong comment from BTS on the #BlackLivesMatter movement. We stand against apartheid 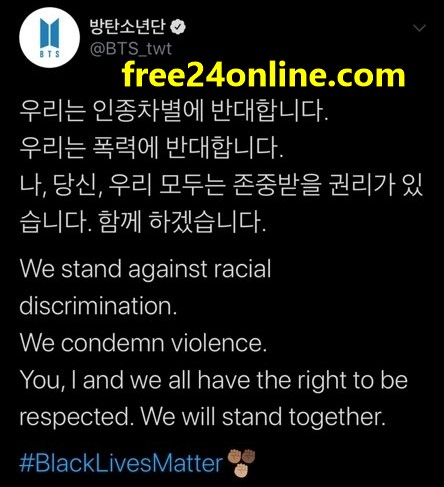 "We stand against racial discrimination
We are against violence
You and I and all of us have the right to be respected. We will stand together "

Bulletproof Boy Scouts "Racial Discrimination, Violence Against Violence, Everyone Has the Right to Be Respected"
[News reporter Hyejin Hwang]

Famous musicians and music officials, such as Lady Gaga, Beyonce, and Billy Irish, also continue to speak out against racism. In Korea, many singers such as Park Jae-beom and Crush also participated in the'BlackLivesMatter' campaign, expressing the meaning of tribute.

Meanwhile, the BTS is in the process of'BTS FESTA' to communicate with fans by sequentially releasing various contents ahead of the 7th anniversary of their debut on June 13th. On the 14th,'Bangbangkhon The Live' will be held in real time online. The performance is broadcast live for about 90 minutes with the concept of inviting fans to the room of BTS.

Prior to this, BTS will participate in'Dear Class of 2020', which will be held online through YouTube original on June 6 (US time). This event was designed by YouTube to celebrate college students, high school students, and their families around the world who graduate in 2020.

BTS will serve as a special speaker along with former President Obama, Sundar Pichai, and Lady Gaga.