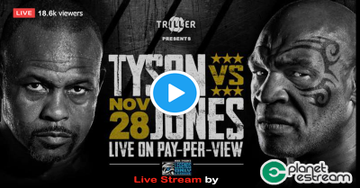 Tomorrow there will be a great exhibition fight between the legends Mike Tyson and Roy Jones Jr. at the Staples Center in Los Angelas, USA. On Friday night the weighing was on the agenda.
"Iron" Mike Tyson in top form
On Saturday there is an unusual, but eagerly awaited exhibition match in the USA.  At the Staples Center, Mike Tyson (54) is back in the ring for the first time since his loss to Kevin McBride and the associated retirement in 2005.  He meets none other than Roy Jones Jr (51 years old), who, unlike Tyson, only ended his career in 2018 and became world champion in four weight classes in his legendary professional career.
On the night from Friday to Saturday, the legends were presented to the public at the official weighing.  The two main fighters Mike Tyson (99.7 kg) and Roy Jones Jr. (95.2 kg) looked very well trained.
Ryan Kavanaugh, who is hosting the event with Tyson, recently went to the press to dispel some rumors surrounding the rulebook for the fight.
In several interviews, Andy Foster, the chairman of the California Athletics Committee, said that Tyson-Jones was going to be nothing more than a tough sparring session and that none of the fighters would seek a knockout.  Foster also said that no winner would be announced and that there would be no judges either.
But now promoter Kavanaugh announced that a knockout would be a possible end and that the world association WBC will place three judges on the ring, who will also declare a winner.  According to Kavanaugh, the only difference is that there will be 8 rounds of fighting and they will only last 2 minutes.  However, boxing is done in 12-ounce gloves instead of the usual 10 ounces.