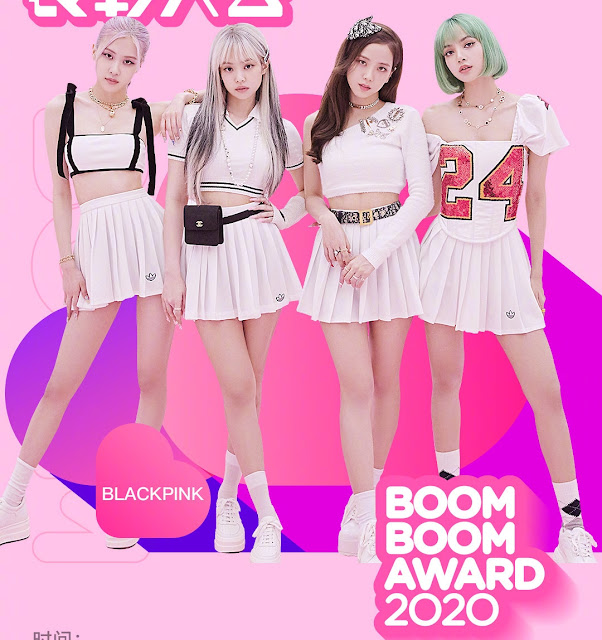 Turning his back on MAMA, Blackpink went to China to attend the Boom Boom Awards 2020 ceremony
Black Pink 'went to MAMA' when attending the awards ceremony on the same day, but in ... China
Black Pink is still absent at domestic awards ceremonies, including MAMA - the best 'drama' award and also the 'best' in Kpop.
Black Pink has many hardworking activities and impressive achievements in 2020, but so far, the group has not confirmed to attend any award ceremony, which makes fans extremely impatient. On November 30, Black Pink finally announced an award ceremony, but was in ... China. Specifically, the YG girlgroup will participate in the Boom Boom Awards 2020 of QQ Music (China). The event takes place on December 6 There is no information about the organization form, but it is likely that Black Pink's stage will be a pre-recorded performance due to the influence of Covid-19. In addition to Black Pink, two other Kpop representatives also participated are Seventeen and Hwasa (Mamamoo).
Black Pink was at MAMA while attending the awards ceremony on the same day, but in ... China
Black Pink fans had mixed reactions to the news that Black Pink attended the awards ceremony in China. Fans are disappointed when Black Pink has never had information about year-end music events at home. However, there is also a part of fans who appreciate this move from YG. The fans said that this was Black Pink and YG's "extremely strong fire" for MAMA - the award ceremony also took place on the same day as Boom Boom Awards. Last year, Black Pink also held a concert in Japan on the same day MAMA took place.
YG and MAMA have a "feud" since 2016, and for many years, the company has "cut off" the award ceremony when they did not send artists to attend. Fans hoped that Black Pink would attend this year's MAMA after Treasure - the junior of the same company confirmed to be present in the line-up of the awards ceremony on December 6. However, until the day when MAMA took place, Black Pink still "disappeared". Black Pink's move to attend the awards ceremony in China on the same day MAMA is said to be a proof that the relationship between YG and MAMA is still very "tense".
There are also some opinions that Black Pink's ability to attend MAMA is still possible because the stage at Boom Boom Awards is pre-recorded. Despite the controversy over the award criteria and the "side" dramas of MAMA, this is still a program that deserves the spotlight of the year-end music festival season thanks to the quality of the stage and the line-up of many names. old age. Therefore, some fans still hope that Black Pink will "beaten" with a spectacular display at MAMA, although this possibility is quite ... small.
Line-up artist confirmed to attend MAMA 2020 (as of November 30):
Treasure
TXT
IZONE
NCT
GOT7
MONSTA X
MAMAMOO
Seventeen
Twice
BTS
Oh My Girl
THE BOYZ
Stray Kids
(G) I-DLE
ATEEZ
CRAVITY
ENHYPEN
However, there are only a few days left until the Mnet Asian Music Awards (MAMA 2020) will take place, although YG has "broken the rules" for Treasure to attend, but Blackpink's presence at this event is still open. Fans guessed that maybe the 4 YG girls will continue to be absent from MAMA 2020 as in previous years.
The idea that Hac Huong would be completely absent at the year-end awards ceremonies, but recently there was an event that received a nod from YG. Accordingly, on November 30, YG confirmed that Blackpink will attend the Boom Boom Awards 2020 music ceremony of QQ Music (China).
It is known that the Boom Boom Awards 2020 ceremony is expected to take place at 6:30 p.m. on December 6 (Vietnam time). However, with the current epidemic situation, Blackpink may record before the group's performances but cannot attend live. In addition to the girl group from YG, 2 other Kpop representatives, Seventeen and Hwasa (Mamamoo), also appeared at this ceremony.
Seventeen and Hwasa also attended the event in China
Seventeen and Hwasa also attended the event in China
As soon as this information was shared, fans immediately realized that the date of Boom Boom Awards 2020 was held to coincide with MAMA 2020. This reminded fans of 2019, the YG girl group also held a concert. at Tokyo Dome (Japan) on the day MAMA aired.
This move made the fans believe that the 4 girls secretly confirmed that they did not attend the Korean award ceremony. And the fact that YG let Blackpink participate at the Chinese awards ceremony instead of MAMA is an expression that this "big man" still turns his back and challenges Mnet after years of "bad rice, not sweet soup".
Not only that, after the incident with some awards such as AAA, APAN Music Awards "forgetting" Blackpink, despite the group's "great" achievements, many more people lost confidence in the Korean award ceremony.
Fans said that YG was in love with MAMA for letting Blackpink attend the Chinese award ceremony on the same day the program was held
Fans said that YG was in love with MAMA for letting Blackpink attend the Chinese award ceremony on the same day the program was held
Thus, Hac Huong has not been confirmed to participate in any awards ceremonies in Korea despite being named a Kpop group. Even if they only need to see the award winners and performers, the fans are happy, but they still hope the group can receive Daesang in Korea rather than appearing in the country's line-up.