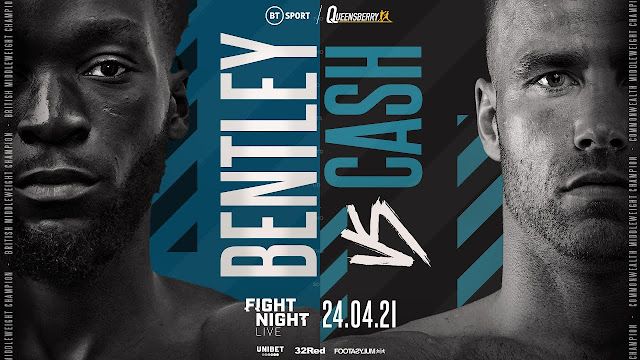 The fight, which is promoted by Frank Warren, Queensberry Promotions, will be televised on BT Sport.

Queensberry Promotions won the bids for the fight between its man Bentley (14-0-1, 12 KOs) and Cash (13-0, 9 KOs), whose Commonwealth crown is also up for grabs.

Battersea's Bentley won the title in November when Mark Heffron was pulled around his corner due to a grotesquely swollen left eye and Denzel insists Cash is next to see what damage his punches can do.

Boxing has returned to BT Sport 1 HD.  The fight is at evening from 7.30 p.m. BST - in the main event of the event at York Hall in Bethnal Green, London, England Green, the still undefeated 26-year-old Denzel Bentley (14-0-1, 12 knockout victories from Battersea, London,  his British middleweight title against the also unbeaten 28-year-old Felix Cash (13-0-0, 9 knockout wins) from Wokingham, Berkshire, England, who will in turn defend his own Commonwealth title.

At today's weighing, the two opponents brought the following weights on the scales: